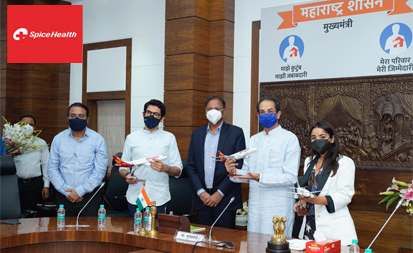 The mobile labs, which are accredited by National Accreditation Board for Testing and Calibration Laboratories (NABL) and Indian Council of Medical Research (ICMR), have been set-up at Bandra Kurla Complex, National Sports Club of India, Worli and NESCO, Goregaon.

Avani Singh, CEO, SpiceHealth said, “After making a significant contribution and helping scale up Covid testing in Delhi, SpiceHealth is proud to partner with the Municipal Corporation of Greater Mumbai and set-up mobile laboratories in Mumbai. At a time when Covid-19 was at an all-time high, we disrupted the RT-PCR testing space by offering tests in mobile laboratories at Rs. 499, as opposed to the then existing rate of Rs. 2400 in Delhi. Our mobile laboratories ensured scalability and our low price ensured affordability and our vigorous testing helped curb the spread of the virus. I am confident that SpiceHealth will help scale up Covid testing in Mumbai and we hope to contribute to the State Government’s efforts in fighting this pandemic.”

SpiceHealth, at present, has five mobile labs at government-designated locations in Delhi and Haryana, a testing facility at Manesar in addition to the genome sequencing facility at the Delhi airport. The Company is conducting around 20,000 RT-PCR tests per day.

In addition to making RT-PCR testing affordable for the common man, SpiceHealth ensured that the test results were made available within just six hours from the time of sample collection as compared to the average 24-48 hours taken by others.

SpiceHealth was also the first to introduce the innovative concept of mobile laboratories that could be placed in remote areas, in containment zones, in villages where access to hospitals and medical facilities was a challenge.

In December 2020, SpiceHealth tied up with the Centre for Cellular and Molecular Biology (CCMB), a constituent lab of the Council of Scientific and Industrial Research (CSIR), for conducting the dry-swab Direct RT-PCR testing at all its mobile laboratories and was the first to introduce this innovative testing method anywhere in India.

In January 2021, SpiceHealth established a portable testing lab for genome sequencing at Delhi’s Indira Gandhi International Airport where all positive samples taken from international travellers arriving at IGI Airport are sequenced as to quickly identify and contain new mutant variants of the coronavirus. The identification of variants is done in less than 48 hours and has significantly reduced the spread of the imported variant strains.

Earlier, SpiceHealth had also launched SpiceOxy – a compact, portable, non-invasive ventilation device, which is an effective solution for patients with mild to moderate breathing issues and had also introduced fingertip pulse oximeter, a handy device making it easier for people to measure the oxygen level of the blood.