Home / Doctor Speaks  / Unprescribed use of Amphotericin B, may cause renal failure!

Unprescribed use of Amphotericin B, may cause renal failure!

With the rising incidence of the black fungus alongside COVID19, more and more patients are indulging in the self-prescription of Amphotericin B - an anti-fungal medication. However, inappropriate unprescribed use of this drug can cause 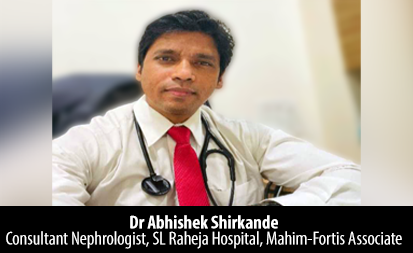 With the rising incidence of the black fungus alongside COVID19, more and more patients are indulging in the self-prescription of Amphotericin B – an anti-fungal medication. However, inappropriate unprescribed use of this drug can cause serious complications too. Here is what you know about Amphotericin B.

WHAT IS AMPHOTERICIN B? Amphotericin B is an antifungal medication used for serious fungal infections and Leishmaniasis. These  include  Mucormycosis,  Aspergillosis,  Blastomycosis, Candidiasis, Coccidioidomycosis, and Cryptococcosis. For certain infections, it is given with Flucytosine. It is typically given by injection into a vein. It is on the World Health Organization’s List of Essential Medicines and is available as a generic medication too. 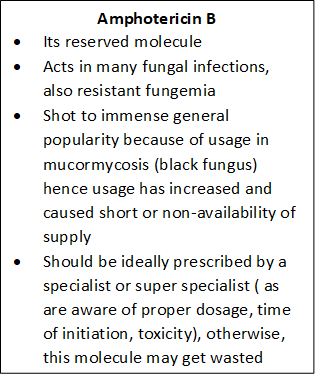 The basic molecule is very cheap but very nephrotoxic (damaging to the Kidneys). Common side effects include a reaction with fever, chills, and headaches soon after the medication is given, as well as Kidney problems. Allergic symptoms including anaphylaxis may occur.

Other serious side effects include low blood potassium levels and inflammation of the Heart. Due to its side effects, it is often reserved for severe infections in critically ill,  or immunocompromised patients. It is considered as first-line therapy for invasive Mucormycosis infections, Cryptococcal Meningitis, and   certain Aspergillus & Candidal infections. It has been a highly effective drug for over 50yrs in large parts because it has a low incidence of drug resistance in the pathogens it treats.

NEPHROTOXICITY LINKED TO AMPHOTERICIN B: The usage of the Amphotericin B molecule has increased due to the rise in Mucormycosis in COVID patients. Also, Amphotericin B is the preferred treatment of choice for healthcare providers across the country. However, people must be aware of the adverse effects associated with its unprescribed use – Nephrotoxicity being the most serious one.

MAJOR SIDE EFFECTS OF AMPHOTERICIN B: Amphotericin B is well known for its severe and potentially lethal side effects. Very often, it causes a serious reaction soon after infusion (within 1 to 3 hours), consisting of high fever, shaking, chills, Hypotension, Anorexia, nausea, vomiting, headache, Dyspnea and Tachypnea, drowsiness, and generalized weakness. The violent chills and fevers have caused the drug to be nicknamed “shake and bake”. This reaction sometimes subsides with later applications of the drug, and may in part be due to histamine liberation. To decrease the likelihood and severity of the symptoms, initial doses should be low and increased slowly.

Intravenously administered Amphotericin B in therapeutic doses has also been associated with multiple organ damage. In addition, electrolyte imbalances such as Hypokalemia and Hypomagnesemia are also common. In the Liver, increased Liver enzymes and Hepatotoxicity (including Fulminant Liver Failure) are common. In the circulatory system, several forms of Anemia and other blood Dyscrasias, serious Cardiac Arrhythmias (including ventricular fibrillation), and even cardiac failure have been reported. The best is to ensure efficacious use of the drug. People should not indulge in self-medication and doctors should be judicious.

Experts say that the newest Omicron BA.2 will not cause another COVID19 surge

Omicron spread and its correlation to achieving herd immunity against COVID19 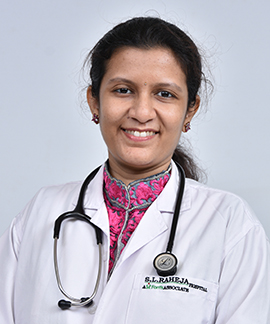 COVID19 may raise the risk of Diabetes in children, C.D.C. researchers report – here’s what you need to know 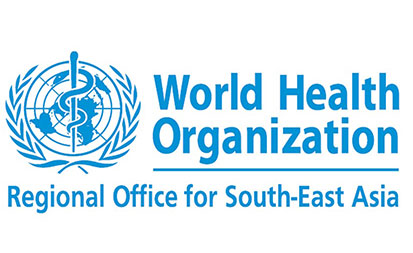 WHO asks countries in South-East Asia Region to be vigilant as cases surge globally and new Variant of Concern is detected.